The great Sphinx is located in Giza, Egypt, it is the largest and oldest statue in the world, the Sphinx sculpture is made of limestone, the original shape of the statue was cut from solid rock and has been restored with layers of limestone blocks.

The great Sphinx is a legendary creation, that has a head of a human and the body of a lion. The measurement of the Sphinx includes from paw to tail 73 m (240 ft) long, high from the base to the top of the head 20 m (66 ft), and 19 m (62 ft) wide at its rear haunches, between the 3rd and 10th centuries the nose, was broken off for unknown reasons, the remaining stone which was cut off from the body around the Sphinx was later used to construct a temple in front of the Sphinx however the temple was not completed. The Sphinx statue represents the Egypt king, as the archaeological evidence suggests that it was created during the reign of Khafre by ancient Egyptians of the Old Kingdom.

The Statue of Liberty is an icon of freedom that is located on Liberty Island in New York Harbor in New York City, in the United States, it is a colossal neoclassical sculpture. The Statue of Liberty is a copper statue, in her right hand she holds a torch above her head, and in her left hand she holds a tabella ansata there is a broken shackle and chain lies at her feet as she walks forward, which shows the ending of national slavery. 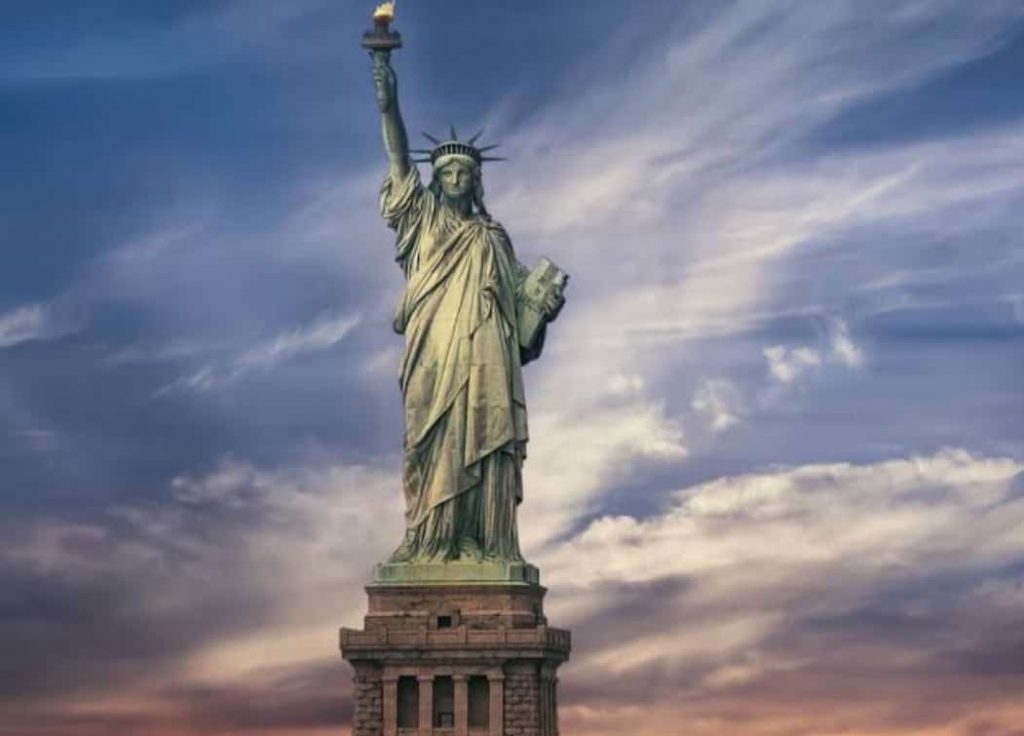 Before the statue was fully designed Bartholdi completed the head and the torch-bearing arm these two pieces were exhibited for publicity. In 1876, at the Centennial Exposition in Philadelphia, the torch-bearing arm was displayed. The Statue of Liberty statue is known as a figure of Libertas, as it was a gift from the people of France, the statue’s metal framework was built by  Gustave Eiffel as it was designed by French sculptor Frédéric Auguste Bartholdi. The height of the copper statue to the torch is 151 feet 1 inch (46 meters) and from ground level to the torch is 305 feet 1 inch (93 meters) in total, the statue was shipped overseas in crates as it was built in France.

Christ the Redeemer is a statue of Jesus Christ it is located at the peak of the  Corcovado mountain in the Tijuca National Park in Rio de Janeiro, Brazil, It is an Art Deco statue created by Paul Landowski a French sculptor, and built by Heitor da Silva Costa he is an engineer along with French engineer Albert Caquot. 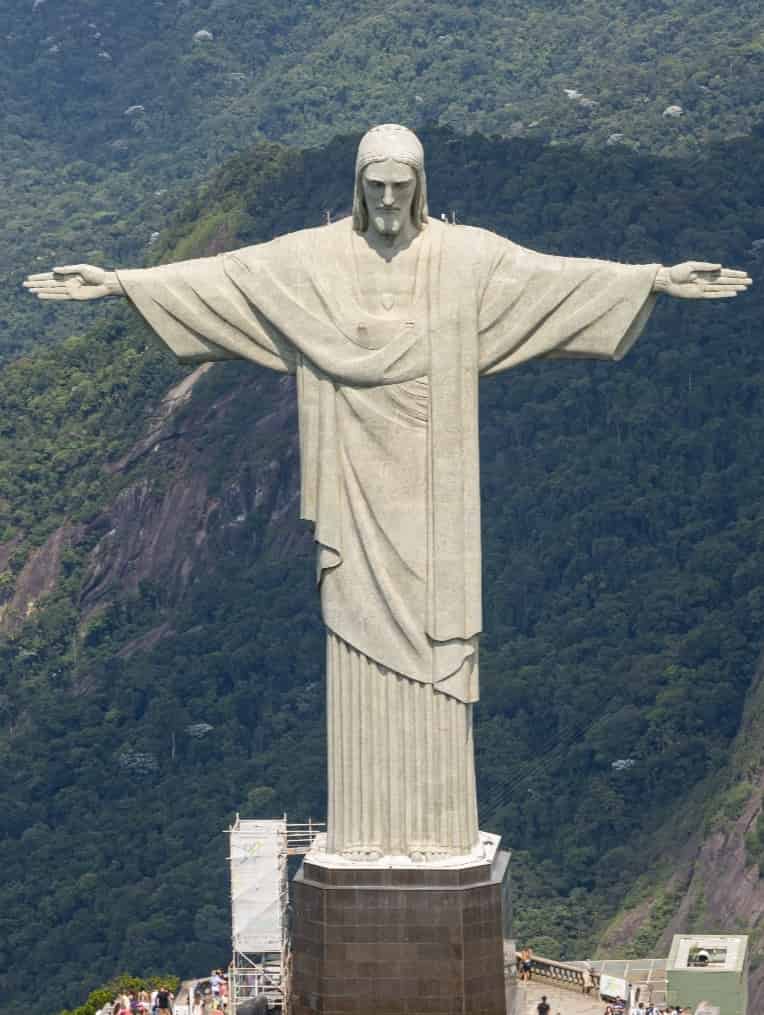 Romanian, the face was sculpted by a sculptor named Gheorghe Leonida. Christ the Redeemer statue was constructed between 1922 and 1931, excluding the 8-meter plinth the statue’s height is 30 meters (98 ft), the stretched arms are 28 meters (92 ft) wide and the weight of the statue is 635 metric tons. It is made of metamorphic rock soapstone and reinforced concrete cement.

Moai are monolithic massive rock human figures carved by the Rapa Nui people on Rapa Nui in eastern Polynesia in years between 1250 and 1500. 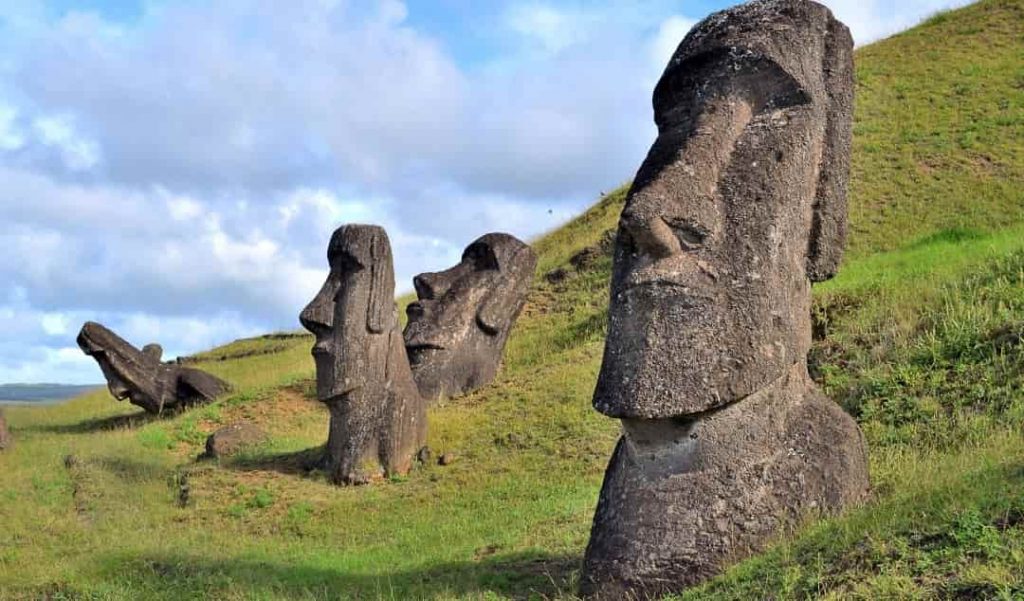 All the moai have large heads with no legs, and the whole statue comprises three-eighths the size, as a result of European contact moai were toppled in the late 18th and early 19th centuries, Paro is the tallest moai erected which has 10 meters high, and weighed 82 tonnes, at Ahu Tongariki there are shorter and heaviest moai erected but squatter moai with a weight of 86 tonnes, there is an unfinished sculpture as well, Moai statues have elongated noses, and heavy brows, the lips are thin the ears are elongated and oblong in form, against the truncated neck, the jaw lines stand out, and the arms are carved in the basrelief method, hands and long slender fingers resting on the hips, though moai are statues with whole-body from many statues are buried to their shoulders, at Rano Raraku some of the heads are excavated and their bodies are seen, with the width of the moai at the base 1.6m, height about 4 m and weigh around 12.5 tonnes each. from tuff, more than 900 moai were carved, there are 22 moai carved from trachyte, 17 from fragile red scoria, and 13 from basalt.

The Thinker is a bronze sculpture in the Musee Rodin in Paris, it was sculptured by Auguste Rodin. The sculpture is an art of work that depicts a nude male figure of heroic size sitting on a stone, his right elbow placed on his left thigh, his chin on the back of his right hand, seen leaning over. 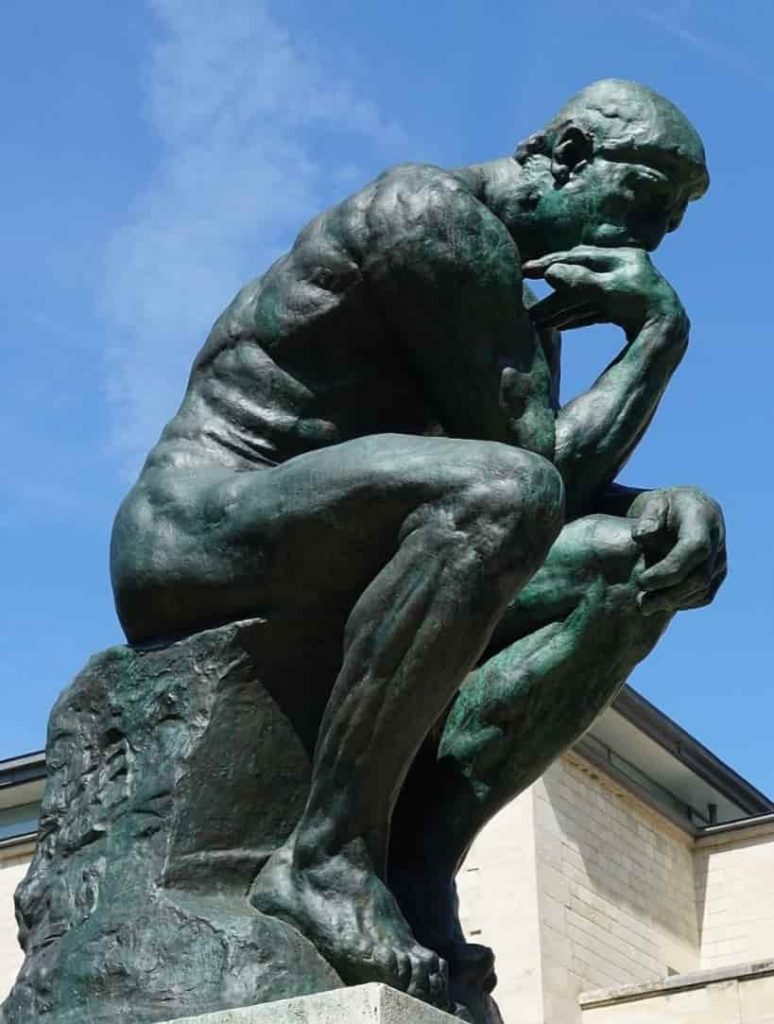 The sculpture is used as an image to represent philosophy as the pose is one of deep contemplation and thought, in 1880, Rodin conceived his work through The Gates of Hell but the first monumental bronze castings were made in 1904 and were exhibited at the Musée Rodin, in Paris. there are more than 27 castings made without Rodin’s supervision its height is 185 cm long, as the Thinker is found in multiple versions and around the world, in the year 1904 at Salon des Beaux-Arts in Paris the first full-scale model was presented.